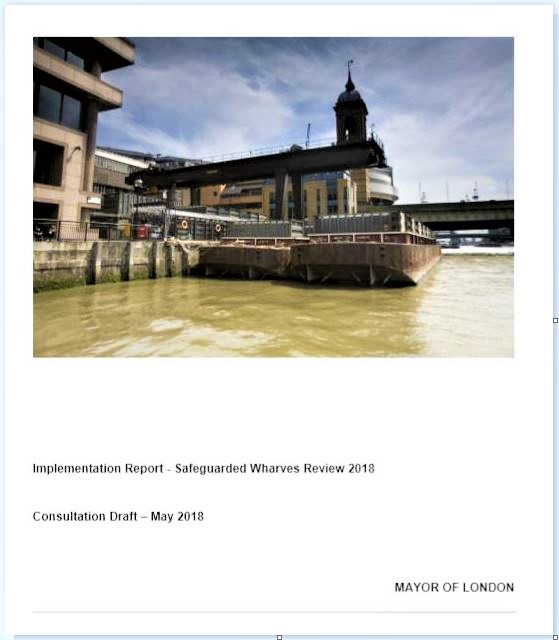 Safeguarded wharves (listed here) are those given special status by the Mayor of London and the Port of London Authority, which ensures they are retained as working wharves and are protected from redevelopment into non-port use.

The first chapter of the review revealed a high level of policy support for the movement of goods by water and the need to have a network of wharves available to load/unload goods.

The Safeguarding Directions Review (2011-13) have enabled the redevelopment of wharves, viable or capable of being made viable for cargo-handling, to be fully considered ‘in terms of the wharf’s operational, planning and transport context’.

In addition to the network of safeguarded wharves listed in the 2018 draft, the Mayor is recommending the protection of the Royal Primrose Wharf (Newham) and the Alexander Wharf (Barking & Dagenham), which are not currently safeguarded. He is also seeking to increase the transport of freight on the Blue Ribbon Network, the city’s ‘strategic network of waterspaces’, which covers the River Thames, canals, tributary rivers, lakes, reservoirs and docks alongside smaller waterbodies.

It quotes from the Water Transport section of the 2016 London Plan:

The review also referred to the Port of London Authority’s 2016 20 year ‘Vision for the Tidal Thames’, developed in partnership with estuary stakeholders, which provides a framework for the development of the tidal Thames through to 2035. The Vision includes six key goals for growth and actions to deliver these goals. One goal is to ‘see more goods and materials routinely moved between wharves on the river – every year over 4 million tonnes carried by water – taking over 400,000 lorry trips off the region’s roads’ (p7).

The Port of London Authority added another safeguarding consideration in its statement to the London Borough of Newham – Local Plan Review Examination June 2018:

“Within this review, as part of the individual site assessments, a number of Safeguarded Wharves in the London Borough of Newham will continue to be safeguarded. Specifically, with regard to Thames Refinery Wharf in Silvertown it is noted that the main jetty provides the deepest wharf in Greater London sufficient to accommodate very large bulk carriers. The Safeguarded Peruvian Wharf is also described in both documents as a viable wharf, with the capability for the berthing of sea going vessels at or near high water.

“In order for these and other Safeguarded Wharves in the Newham area to remain as viable wharf locations, any proposed river crossings must ensure that they are designed to allow unrestricted access for vessels travelling to and from these sites”.

This site uses Akismet to reduce spam. Learn how your comment data is processed.